Today, we have author, Andrea Jo Rodgers with us to answer some questions and tell us a bit more about her new book, SAVING MT. RUSHMORE: St. Michael the Archangel Academy, Mission One

Welcome, Andrea, thanks for taking the time to chat with us. Why don’t you start by telling us a bit about yourself.

I’m a happily married mother of twins. I love helping people through my work as a physical therapist and as a volunteer emergency medical technician with my local rescue squad. I enjoy reading, writing, taking day trips, and travelling. I also love my miniature dachshund and Belgian Shepherd.

So, you’re newest novel, SAVING MOUNT RUSHMORE released earlier this week, Tuesday to be exact. Can you tell us what it’s about?
When John Jenkins’ parents ship him off to stay with his aunt, he’s certain it will be the worst summer ever—until he learns he’s been accepted to a top-secret school. St. Michael’s Academy is home to gifted students with extraordinary talents. Although John has no idea why he’s there, he’s assigned to Team Liberty, who assist authorities with low-level crimes. Their first mission: stop a trio of mischief-making teens from vandalizing Mount Rushmore.

John battles feelings of inferiority as he and Team Liberty compete against Devlin Black and his cronies to track down clues and solve puzzles at Mount Rushmore. Along the way, John makes several key contributions, and his self-confidence grows. When he discovers he was admitted to the school due to a clerical error, he’s mortified. Now, he’s strictly an “observer” until the mission’s end. But when his teammates run into trouble, John must summon up the courage to try to save Mount Rushmore, and he learns an invaluable lesson: every person has special God-given gifts—including him. 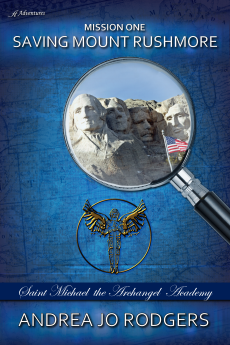 What was your inspiration for writing this book?
I knew that I wanted to write a book about an unlikely hero. I conceived the idea for Saving Mount Rushmore while my family and I were flying to visit Mount Rushmore and Yellowstone National Park.

What’s your favorite scene from the book?
My favorite scene is when John must face his fears and rappel down the face of Mount Rushmore. Here’s an excerpt:

Although John’s insides had turned into a quivering mass of jelly, he knew he had to push on. He thought of St. Michael the Archangel and prayed that he might have even a fraction of his courage in the fight against evil. Keeping his eyes firmly shut, he jumped backward off the edge and hoped for the best.

As his feet struck President Lincoln’s granite hair, he heard an ear-piercing scream arise from the amphitheater, followed by several others. He had no doubt the screams were caused by the crowd realizing that someone was hanging in front of President Lincoln’s face.

It sounds wonderful! Where can we get a copy?

What one book or series do you wish YOU had written and why?
I wish I had written my favorite book, Pride and Prejudice, by Jane Austen. She wrote so eloquently and brought her characters to life so vividly. She transported me back to the early nineteenth century. The first time I read Pride and Prejudice, I never wanted it to end. To me, that’s the sign of a great book.

What one piece of advice would you give to new writers?
Write about what you love. Try to set aside a little time each day to write, even if it’s only a few minutes. Even when I can’t actually write, I plan out the next scene when I have a free moment or when I’m falling asleep.

Thanks so much, Andrea!